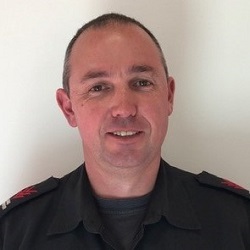 David Rylance has been a firefighter with the Metropolitan Fire Brigade Melbourne since 2008.

In 2012 David was approved by CASA as the Chief Remote Pilot for the MFB and still hold that position today. MFB RPAS operations have seen him deployed all around the state of Victoria in support of a wide variety of emergency situations. He currently work in the MFB Technical Operations Department RPAS Unit based at the MFB Burnley Complex.

David is also am a volunteer lifesaver and has been assisting Life Saving Victoria in establishing a RPAS capability. Earlier this year he was approved by CASA as the Life Saving Victoria RPAS Chief Pilot during the trial of RPAS for life saving operations in Victoria.

Over the years of operating RPAS he has seen a significant changes in the technology and how it is becoming an important source of intelligence to assist Incident Controllers in their decision making at Incidents.

CASE STUDY: Remotely piloted aircraft from an idea to business as usual in the Melbourne Fire Brigade