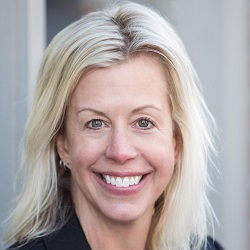 Victoria Lee is Vice President of the Public Safety Network. Her 25+ year career in public safety includes serving as a volunteer firefighter and working with the International Association of Fire Chiefs (IAFC) and the First Responder Network Authority (FirstNet). She joined FirstNet in 2013, shortly after its inception. While there, she worked the start-up phase as well as worked closely with the Public Safety Advisory Committee (PSAC) and public safety associations from all disciplines. She focused on public safety consultation efforts across the country and was a member of the team that developed 56 individual state and territory network deployment plans. Her most recent work with the IAFC included a portfolio of programs which focused on collaborative work with other national fire and emergency service organizations such as the International Association of Fire Fighters, the National Fire Protection Association and the Congressional Fire Services Institute. Vicki led several projects that brought together representatives from these organisations and others to develop training programs, reports and assessments, and other resources for the fire and emergency services. With a strong commitment to public safety and focus on collaboration, Vicki’s leadership and energy have resulted in several successful organizational partnerships. Vicki received a B.A. from the College of William & Mary and an M.P.A. from George Mason University.