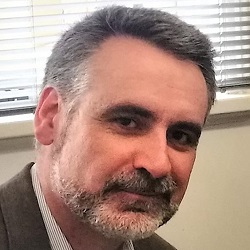 Peter Clemons has been involved in the global critical communications industry for over 20 years. He has promoted TETRA and other complementary radio technology standards in Latin America, North America, UK and Europe, Asia‒Pacific region and Middle East. He is a former director and board member of TCCA and remains an active member of TCCA Marketing Group, Transport Group & Critical Communications Broadband Group (CCBG).

Peter is Founder and Managing Director of consulting firm, Quixoticity, founded in 2012 — a member of ETSI, 3GPP, TCCA, Cambridge Wireless & eLTE Industry Alliance. As a member of 3GPP & ETSI, he now spends much of his time studying critical communications requirements and solutions for future 5G standards. Peter launched the first edition of the ambitious, groundbreaking Quixoticity Index in late 2017, which lays out a future roadmap for the global critical communications industry and community until 2030 based on the three pillars of mission-critical, 5G and United Nations Sustainable Development Goals (SDGs).

Peter is a regular visitor to Australia and has spoken many times at the Comms Connect Melbourne event. He maintains a keen interest in the evolution of Australian critical communications solutions with a particular focus on the migration to next-generation PSMB (public safety mobile broadband).

Critical communications at the edge (revisited)